I’m excited to be opening this ekphrastic show – painters responding to poets and poets responding to painters – at Zip 37 Gallery in six short days. The entire project had its origin in this blog, sort of, about a year ago. I was participating in Leslie Saeta’s 30 in 30 challenge after losing my studio made me wonder if I would ever want to paint again. Ken Smith was at that time writing a poem a day and posting those poems on Facebook. Ken wrote a piercing short poem titled Clown College Failure in response to one of my little 30 in 30s and I started a large canvas in response to his poem, “An Old Man’s Story.”  Do you remember the old Reese’s Peanut Butter Cup Ads? Saying it was just like that is silly, but tonight I feel silly and I’m going to embrace that.

As the date for my show neared, I approached Ken to see if he would be interested in participating in a larger ekphrastic project, including works from some local painters I admire (Gina Smith Caswell, Rebecca Cuming, Joan Fullerton, Lance Green and Mark Penner Howell) as well as a few of my own. Not only was he up for it, he enlisted two Indianan poet friends, David Dodd Lee and Ross Taylor, to participate as well.

Each painting will hang along side its corresponding poem. I could not be more excited for this show. I haven’t seen most of the poetry yet, and one of the paintings will be a surprise to me as well. I love having something to look forward to in these dark times.

Haven’t blogged in almost a year.

Honestly, I forgot I had a blog until I got the ICANN notice wanting me to renew the domain.

Been in the bottom of a well and then the election just kind of buried me.

Jesus. That parallel world of stupid and horrible people is larger than I ever imagined.

But I am putting together a show with the help of some gifted painters and poets. 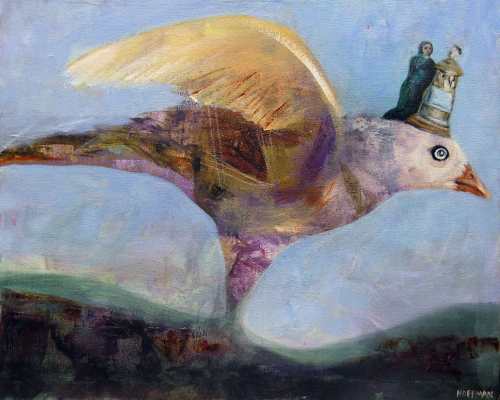 Tagged can art save us, Clouds, confusion, I kind of doubt it

I’ve been searching for a reason to keep painting. I found Leslie Saeta’s 30 in 30 challenge and it has given me some steam. Happy New Year to all.

Edit:Last year I learned a new word, “Ekphrastic.” My friend Valerie Savarie, an altered-book artist,  put together an exhibit with that title in which poets responded to works of visual art with their literary works, then read their poems aloud at the opening reception.

Yesterday, I was thrilled to read poet Ken Smith’s “Clown College Failure,” sparked by his looking at this  painting.

At the end he had that unconvincing smile, maybe half a tube
Of grease paint, one green shirt with matching pants, a box
Of small hats with massive wigs, and a keen sense of the shocks
That flesh is heir to. On the wide college lawn, after he begged
The dean of clowns for another chance to play the hapless rube,
The world said the role is yours and the world has not reneged.

Ken is a writer and English professor living in South Bend, Indiana.

Check out his Twitter feed here, and listen to him read his Michiana Chronicles essays here.

Thank you for the ekphrasis, Ken!

Because it is Bitter

Tagged Because it is Bitter, In The Desert, Katie Hoffman, Stephen Crane, Townes Van Zandt, Waitin' Around to Die

Tagged Before the World was Made, The Waterboys, Tread Softly, Yeats

I Carry Your Heart 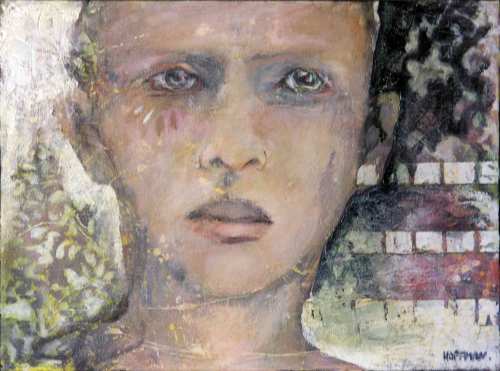 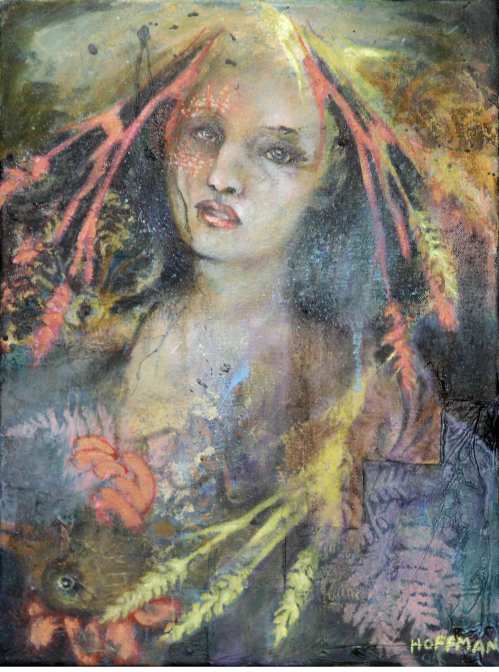 Delighted to find, today, an album (can I still call it that? It’s a digital download…) that celebrates the song writing of Joanna Newsom and is donating the proceeds from sales to Pakistan flood  relief funds, via Oxfam America.

I  hear less in the news about the tragedy in Pakistan than I do about Haiti, and I don’t know why that is. Proximity? Religion? I don’t think that the need is any less urgent.

Newsom’s songs are quirky, poetic, jangling,and joyously bone-quivering. It’s such good stuff, and interesting to see how other musicians interpret the work of this accomplished young artist.

You can give “Versions of Joanna” a listen here, and buy it with a donation to Oxfam here.